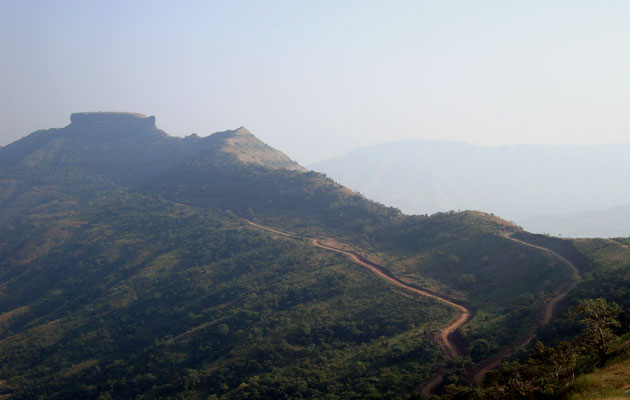 Panchgani, a hill-station situated in the state of Maharashtra is a preferred option for spending summers, especially for people staying in nearby cities such as Pune and Mumbai, owing to the proximity. Ask a local guide about tourist places around Panchgani that must not be missed and he will certainly mention spots such as Table Land, Sydney Point, Devil’s Kitchen and Parsi Point. These are indeed a great sight, however there are some other locations too, which are equally spectacular and not yet discovered by many. Every week We will list a Place which is not so famous but is a must visit if  you are an offtrack traveler. We are covering off-track places that are not that well known yet offer breathtaking views for those who love such places. We will add one new place every week to  Tourist places around Panchgani  – One of the most serene and beautiful places in Panchgani, the Krishnadevi Mandir is a very beautiful rock temple. Marginalized due to the more popular Panchganga and Mahabaleshwar Temples, this temple is often overlooked in preference to the others. The Archaeological Survey of India has demarcated this as a protected monument. This means that the nearby areas cannot be commercially exploited, thus restricting all the shops and hawkers that crowd around the other temples. This has proved to be a boon in disguise as the vicinity of the temple remains uncluttered and retains its serenity.

Constructed 300 years ago, the name Krishnadevi was given in reference to the river Krishna. The temple offers an extremely beautiful view of the Krishna valley, below. This temple was built by a family of Brahmans known as Anagala who were based in Satara. The construction is given a theater-like appearance with one side having the temple and the other two sides enclosing the temple courtyard.

The North Side of the temple is the most important aspect of this Mandir. It has 5 orifices from which water flows out. These are said to be the origins of the Five Rivers; Krishna, Koyna, Yenna, Gayatri and Savitri. These rivers flow individually for a short span and then converge into one stream. The stream comes out of a cow’s mouth (Gaumukh). The cow is supposed to be one of the holiest animals in Hindu beliefs and hence it has been used as the symbol of origin for these rivers.

The combined stream is collected in a holy tank, which is used by worshippers to take a dip in. Two important rivers, Bhagirathi and Saraswati, also flow along the side of this tank and add to the sanctity of the place. The main water tank spills into another smaller tank, and the water then flows off to form the starting point of the various rivers that are the main source of water supply for the huge land mass and population in Maharashtra. Fortunately, remaining free from commercialization, not many people come here and it usually remains a clean and pure tank of water. (Hopefully you too will maintain its cleanliness by avoiding indulging in any bathing or swimming activities there).

This place is for people who enjoy silence, peace and calm. A few minutes of meditation or even just sitting in the enclosure for a few minutes will give you tremendous peace. Ensure that you take water and eatables, as you will not find anything in its vicinity. Trekking shoes should be ideally worn, especially in the rains as the rocky steps can become slippery to navigate.

Once again, we request you to maintain cleanliness and not litter the place with garbage, so that generations to come can enjoy this beautiful temple. The whole concept of monuments and temples revolves around treasuring the true gifts of nature, like water and rivers, by giving them the status of a God as they give life to the world. Hence, whatever belief systems you belong to, just for this wonderful philosophy we should try and treasure such monuments.

We hope you enjoy this exquisite place and that you will share your amazing memories with us through your photos and comments. Menavali is a village in Wai. ‘Wada’ is a Marathi word which means mansion. Menavali Wada was constructed by Nana Fadnavis, a Maratha statesman belonging to the Peshwa era. It was created on the banks of the river Krishna in 1780’s. He built the royal mansion together with 2 temples, one devoted to Lord Shiva and the other to Lord Vishnu.

Formerly, simple stone steps sliding into a river, the ghats developed in a complex arrangement of terraces having independent areas for various activities like washing, bathing, filling water, conducting religious rites, etc. Temples were customarily made on ghats.

The Peshwa period saw excellent architectural arrangements of a Wada-like residence, ghat on a water body along with a temple. Menavali Wada is among those rare spots where such a combination is conserved intact.

Now under the care of Nana’s progeny, the Wada is in fairly good shape. You must see this colossal house which has all the trademarks of a classic Wada of ancient times. When you go down the steps and turn right, you can see a breath-taking sight of the mighty Pandavgad fort at a distance.

Numerous Bollywood movies have been filmed here. An ancient tree having a huge trunk and a platform built around it is present since the time the Wada was made. The tree was shown in Swades, a popular Bollywood movie. Other films that have shot certain scenes with this place as the backdrop include Gangajal, Bol Bachchan, etc. and the upcoming SRK starrer Chennai Express.

Whether you are a history buff, admirer of intricate monuments, religious person, etc. these places in and around Panchgani will capture your attention for sure. If you are patriotic, grew up on Shivaji tales and are looking for tourist places around Pune, then Raireshwar should be your first stop. It is a town in Bhor taluka of Pune. This place has a 16th century temple in which Shivaji took the crucial ‘Hindavi Swaraj’ vow at 16 years of age, which marked an important event in the history of Maharashtra.

Inside this shrine, you can see a large painting of Shivaji with his friends. Positioned between beautiful hills and forts, the temple is located on a plateau that blossoms with lovely flowers during monsoon, making it the ideal time for visiting. You can go camping too as the villagers help in lodging and food. Don’t forget to eat delicious bhakri with buttermilk, typical Maharashtrian fare.

You may also like to stopover at Jiva Mahale Ghoda Maidan, named after Jiva Mahale, a soldier serving in Shivaji’s army. He played a major role in defeating Afzal Khan and moreover considered to be an important reason why Shivaji could survive the battle. The ground seems to have turned into a horse training base since then.

It is a fort located in Wai. Owing to its altitude of over 4,500 feet above sea level, one can view a magnificent aerial sight of the Dhom dam, dense forests and lush green plant life. It is even believed to have an underground route to Pratapgad, a popular tourist destination.

Reaching Kamalgad is simple. Once you reach Wai, you can hire a car that will take you to a temple. From there, you need to trek for a short distance to reach the fort.  A local folktale is attached to this spot. It appears that a wedding group mysteriously vanished from that place and was later transformed into 3 hills.

The largest hill known as ‘Navra’ which means husband, the smaller one called ‘Navri’ meaning wife and the third termed as ‘Karavali’ denoting the wife’s younger sister who stays for a few days at her sister’s matrimonial house after the wedding. The Ravine Hotel in Panchgani offers an exquisite view of all these hills. Located on the banks of Krishna river which has 7 ghats, Wai is a city in the district of Satara in Maharashtra. The beautiful town has many temples dedicated to different Hindu deities. One of them is the Dholya Ganpati temple situated along the river. This prime temple was constructed by Raja Bhoja of the Shilahar Empire in 1762 to guard the city.

Carved out of monolith, the Ganpati idol was sanctified in 1769. The name Dholya (huge or fat in Marathi) signifies the massive size of the Ganpati idol, which is about 10 feet tall and 8 feet wide. The temple also has a spacious hall in the front.

Another temple that Ganpati devotees must visit in Wai is the Dhundi Vinayak Mandir. It is around 900 years old and was popular during the reign of Shivaji, founder of the Maratha Empire. The temple is made from hard stone, whereas the self-created Ganpati statue is around 90cms tall. When a wedding takes place, the idol is worshiped first, before the other rituals.

Those living in Pune can conveniently drive down on any weekend to Wai since Pune to Satara takes less than 2 hours and another 1 hour to reach Wai. From Panchgani, you can reach this divine temple city in just 20 minutes.